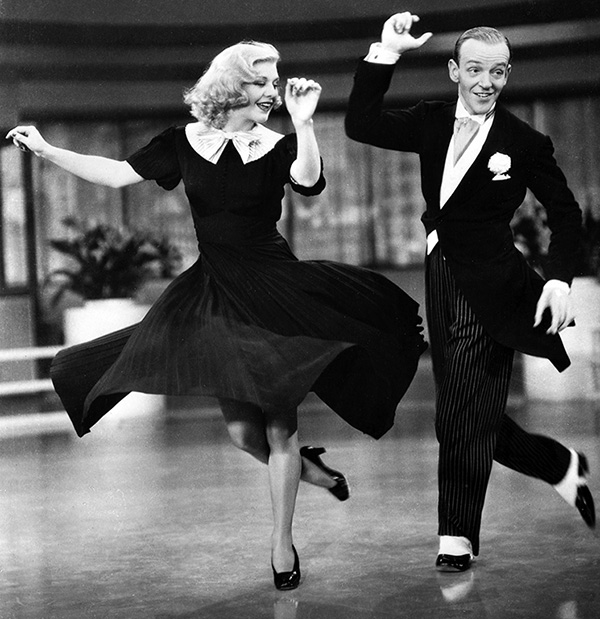 “The only way to make sense out of change is to plunge into it, move with it, and join the dance.” Alan Watts

While the challenging outer planet transits that dominate this year are still in force, this Leo New Moon brings a bit of relief and lightness to the overall picture, giving us a chance for some fun and creative times. But the planet of the unexpected, upsets, and radical change — Uranus — is challenging all that lightheartedness with demands for practicality (it’s in earthy Taurus), so you’ll want to work on being both poised to move quickly while staying well-grounded.

Yes, that’s a challenge, but the image that you can work with is a dancer, who must be intimately familiar with the ground upon which they dance, the forces of gravity, and the bones and muscles of their body to be able to take flight and create art through movement. Dancers need discipline, focus, and strength to be able to express the sublime feelings that become the dance.

Dance can be entirely choreographed, entirely spontaneous, or anywhere in between. You’ll probably be happiest and less stressed if you do some choreographing of your life, which involves planning carefully and paying attention to practical matters, like getting your car’s oil changed at the right interval and making sure the bills are paid on time.

This is also a good month to figure out how to automate some of your repeating practical tasks. Set up automatic payments for your bills, and use some kind of digital calendar with reminders that pop up on your phone or computer, then reset automatically. Time spent setting up automation is repaid in spades.

Joy is another integral characteristic of dance, and one we can cultivate. It is often found in spontaneous expression, so pay attention to what brings you joy. Not happiness. Not contentment. Not euphoria. Pure joy. Remember when you’ve felt it before. Invite it back into your life, then allow events and circumstances to manifest spontaneously and move you into a place of joy.

Life’s what happens when you’re busy making other plans 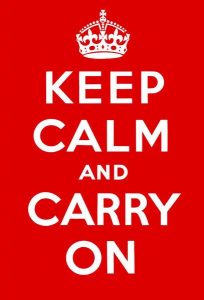 Be ready to improvise, and turn on a dime. There’s a strong likelihood of unexpected, surprising events that will mean changing your plans, moving quickly, and in a different direction.

Watch your reactions when these unexpected events occur. It’s so easy to resist change, even when it may be exactly what we need. Don’t turn an opportunity into a struggle. Let your mind be open to possibilities, and project your best outcome. Or at least do as the British WWII poster suggested (complete with a crown above the phrase, so you knew this was advice from on high) — “Keep Calm and Carry On”.

As I have noted elsewhere, this year of 2019 is a year of closure, as several outer planet pairs are in the closing phases of their cycles. (Astronomically, a cycle both ends and begins when they come together in the same part of the sky in an aspect called a conjunction.)

These closing cycles suggest a year of uncovering, of breaking open, of letting go. There will be losses, yes, but much of what we leave behind will be what we needed to rid ourselves of to create something new and better for ourselves, family, and community.

I’m sure you’ve seen this already all around you, and you can expect it to continue. The changes are inevitable. How you deal with them is up to you. Dancers’ movements are inspired by their souls. If you want to know what moves you should make as you encounter forces of change, check in with your soul.

All this energy of resistance and challenge will play out on the national stage as well, likely in some interesting ways. I’ll get into that right after I give a few words over to the astrology, for those of you who speak or are learning the language.

For astrologers and the astrologically-curious: Cast the chart for July 31, 11:11 p.m., Washington, DC. 16° 51’ of Aries is rising. I’m using equal houses. This chart is valid for the USA for the month ahead. Cast to your coordinates for more local information.

Here’s what I’m looking at:

It’s tempting to take this stellium in Leo with Venus conjunct the New Moon as suggesting that we’ll all prioritize having fun, or that this is going to be a bright and shiny month. Some individuals may be able to pull that off, depending on their own predilections and personal transits, and that energy is there, but it is being challenged. Look at the outer-planet aspects — they tell a different story.

Venus is in a tight opening square with Uranus, and the New Moon is still well within orb of that square as well. Jupiter is, as it has been almost all year, square Neptune (with the last pass coming on September 21), and Saturn, conjunct the South Node and Pluto, is square the Ascendant. To top it off, Mercury is stationing direct in opposition to Pluto on the degree of the lunar eclipse two weeks ago.

The Venus-Uranus square is approaching, and very close to partile. Keep in mind that Venus disposits Uranus — in this chart and for 6+ years yet. Six planets are in Fire (7 if you include Chiron), Aries is rising, Mars is trine the Ascendant. Whew! And The Triumvirate (Pluto, Saturn, and the South Node all conjunct in Capricorn) are right at the top of the chart, with Saturn ruling the MC.

Also note that Jupiter and Mars are in a grand trine formation with the ascendant. Keep in mind that trines are best described as an easy flow of energy. They are usually beneficial, but when you are looking at a mundane chart, the question always has to be “beneficial for whom?”.

In this case, note that Mars rules the Ascendant which indicates the people of a country, and the eighth house of big business, espionage, death, taxes, the money of other countries. Jupiter rules the 9th (legal matters, religion, higher education, and philosophy) and 12th (institutions of restraint — voluntary or otherwise — such as prisons, hospitals, monasteries, also criminality, hidden enemies, more espionage, deep spiritual seeking) where it squares Neptune.

And we can’t forget Pluto in opposition to a stationary Mercury — it’s less than an hour from going direct. The station degree is a power point for a planet, and this aspect is one to watch.

Oh, and by the way — all that spooky stuff you’ve been hearing about a Black Moon? Astrologically, it’s meaningless. It’s just an accident of the calendar. Now, if you work calendar magic, this could give you something to work with, but otherwise, it’s just a regular New Moon.

OK, let’s interpret all that. (And if you have any questions about how I got from the astrology above to the interpretation below, feel free to bring them to my FB page)

There’s definitely a profound shift of energy. But governments and cultures are not likely to turn on a dime (even when it’s necessary, as it is now for climate change), or gracefully pirouette into the future. But change is happening, and we can help direct its path. Every individual contributes something to our societal reality, on levels ranging from the physical to the purely spiritual. Assessing how we influence our community and collective — mentally, emotionally, energetically and physically — is work worth doing right now.

There’s a lot here that suggests exposure of information that’s been kept secret. This chart suggests that children will be emphasized, and sexuality, so we can assume the pedophilia scandals will continue — hopefully all the way to the convictions of all involved. However, the cover ups aren’t going to go away. I suspect one or two famous people will go down, but then the cover ups will snap back into place if we don’t keep making a lot of noise about it.

This cancer infects our society at all levels, makes a lot of people a lot of money, and will not be eliminated easily, because there are influential people with no scruples fighting to keep this evil in place. We’re talking enslavement, and the ongoing sexual exploitation of children as big business. If you suspect child abuse, do something. Here’s a guide to what you can do.If you don’t do something, you’re complicit.

We are going to experience the continuation of ideological battles, but this month, these battles are likely to manifest not just on the internet or in the news, but on the streets, in the forms of possibly violent protests and perhaps riots. If we’re lucky, maybe we’ll get some cool flash mobs instead.

(As I write this, there’s been another mass shooting, this time at a garlic festival. I had thought of adding “mass shootings” to the paragraph above, but didn’t, and apparently I need to rethink that. So, yeah, violence is indicated by the astrology, and be aware that pretty much wherever you go, someone may pop up with a weapon that can kill multiple people in seconds, and start shooting at you. But you knew that.)

There is some crazy money stuff happening this month, that I expect is more likely to manifest as irrational exuberance than panic. Financial astrology is tricky, but I suspect we may hit some unprecedented market highs and other milestones before reality kicks in later this year or early next. Astrology indicates that we are on the edge of a major financial correction, and buying high is never a good strategy. Unless you are a professional or dedicated amateur in finance, you might want to begin to prepare for an economic retraction now.

Weather and climate issues will be front and center this month. Floods, fires, and earthquakes are all distinct possibilities, and I suggest paying close attention to weather reports in your area, and having an evacuation plan in place.

Politically, the executive branch will be under tremendous pressure this month, but continue to be wrapped in an increasingly-tattered cloak of obfuscation and outright lies. There will be fireworks set off by scandals and accusations, and heavy-handed attempts at gaining control. But there’s a “You can run but you can’t hide” vibe in the skies these days. All those closing outer planet cycles presage a new beginning.

This is a big-energy month, with the capacity for pioneering major changes. You can dance or stumble through those changes(most of us will probably do a bit of both), but be sure you’re listening to the music that comes from your soul.

Now, go get your dancing shoes on!