The Astronomy of Astrology

I find that a lot of people shy away from astrology because they believe it is based on incorrect astronomy, and so cannot possibly give accurate information. Perhaps they’ve seen a video by Bill Nye or Neil deGrasse Tyson taking about how the constellations don’t line up with the signs anymore, and that pesky “extra” constellation (or two). Unfortunately, both Nye and Tyson are clearly ignorant about astrology — a great deal more ignorant than most astrologers are about astronomy. We are not only fully aware of the positions of the constellations, the precession of the equinoxes and the fact that the Earth revolves around the Sun (OK, I’ll try to tone back the sarcasm) but astrology is divided into two major branches based on how we deal with the constellations (groupings of stars) and the precession of the equinoxes.

I’m not going to address the different types of sidereal astrology, of which Vedic astrology is one. Sidereal astrology carefully makes allowances for the precession of the equinoxes, because it works with the positions of the signs relative to the constellations. I’m going to explain the basis of Western astrology, a tropical astrology, which determines the position of the signs relative to the ecliptic, the apparent path of the Sun around the Earth. I find that a number of astrology students worry about learning the “technical” side, but while the math of astrology can get complex, the basic astronomy really isn’t very difficult to understand, and understanding it will give you considerably more insight into the craft than you could possibly have without it. So I encourage you to take a deep breath and jump into the learning — I’ll make this as easy as possible. Ready? OK, let’s start.

Meanwhile, back on Earth…

The first thing you need to know is that astrology’s astronomy is geocentric — Earth-centered. Given that we are looking at the correlation  between the planets and our lives on Earth, that makes sense. (Oh, and let me note that saying, “Sun, the Moon, the planets, dwarf planets and asteroids”  gets old quickly, and astrologers tend to shorten that to “the planets”, as I will here. Yes, it’s not really correct, and yes, we do know that the Sun is a star, and that the Moon is a natural satellite of Earth, but I hope you will indulge me in this.) Now, back to that geocentric celestial coordinate system astrologers call the Zodiac.

The Zodiac tracks the planets along the circle of the ecliptic, which is the observed path of the Sun around the Earth. Because the Earth’s axis is usually tilted in relation to the Sun, the ecliptic is usually at an angle to the celestial equator (which is simply the circle of the equator, the dividing line between the two hemispheres of the planet, projected far out into the “celestial sphere”) 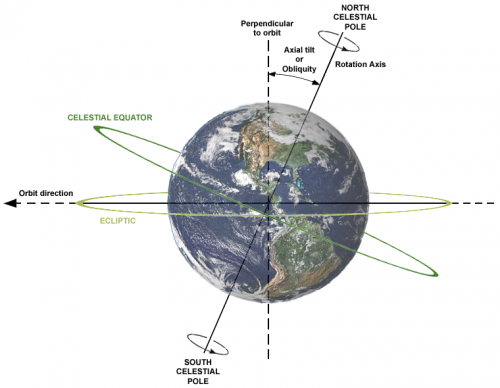 There are only two times during the year when the Earth’s axis is not tilted in relation to the Sun — the two equinoxes — and so at these times only, the celestial equator and the ecliptic intersect. Astrology takes the Vernal Equinox, which happens around March 21, as the starting point of the circle of the Zodiac — and we call that starting point zero degrees of the sign Aries.

The Zodiac (a circle, so 360 degrees by definition) is divided into twelve equal parts of 30 degrees each. Those 30 degree sections are called “signs” and were originally named for the constellations that were in that area of the sky, way back when (the Babylonians, in the early first millennium BCE, were the first to divide the ecliptic into 12 equal sections, and Ptolemy codified the tradition that is now Western Astrology in his Tetrabiblios, in the 2nd century CE). However, these constellations were used simply as markers for a particular area of the sky — the constellations did not define the signs. Think of it this way — you may live in a house on Big Barn Lane, and back when Big Barn Lane was originally named, there was, in fact, a big old barn right there marking the intersection. The fact that the barn was dismantled years ago and moved to the other side of the property, where it was rebuilt as the new owners’ home, does not change either the name or the location of Big Barn Lane. So it is with the signs of the Zodiac — the sign Taurus, for instance, occupies the location between 30 and 60 degrees of the 360-degree Zodiac, where 0 degrees is defined by the intersection of the ecliptic and celestial equator at the Spring Equinox. The fact that the constellation Taurus no longer occupies that area of the sky is as irrelevant as the current location of the old barn is to the location of Big Barn Lane.

Now that we have the Zodiac established as a particular way of defining and dividing the ecliptic, we can look at the path of the planets as viewed from the Earth. Because of the way the solar system was formed, the planets’ orbits stay within a few degrees on either side of the path of the ecliptic: in other words, if you put a belt around the middle of the Sun it would only need to be a relatively narrow belt to contain the orbits of all the planets.

What astrologers are tracking is the movement of the planets through the sky as viewed from Earth, and how they are placed in relation to the Sun’s path and to each other. For instance, Jupiter may be on the same side of the Sun as Mercury, or it may be in the same sign, the same 30-degree section of the sky, as the Mars, and at a 90 or 150 degree angle to Mercury. All the other planets will also be at different points in their orbits, and in different, ever-changing, relationships with each other. When astrologers speak of “aspects” we are referring to the way the planets are positioned in the Zodiac in relationship to each other.

Our yearly orbit around the Sun is part of an ongoing dance of the planets that we trace through the sky in relationship to the Sun’s seasonal path, which is marked at its highest and lowest points by the solstices. Those points are known as the Tropic of Cancer (the Summer Solstice is in the sign of Cancer, when the Sun is as far north of the equator as it will get) and the Tropic of Capricorn (the Winter Solstice heralds the Sun’s entry into the sign of Capricorn, when the Sun is at its southernmost point. 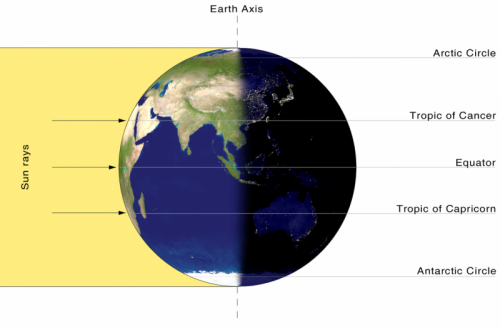 Revolution Earth
It is the path of the Earth through the Zodiac in the space of a day that anchors the chart in a specific place and time, and when astrologers speak about the Ascendant (or “rising sign”) and Midheaven, this is what we are looking at. In any given moment, at any given place on Earth, a specific degree of the Zodiac is rising on the eastern horizon. Another specific degree of the Zodiac will define the highest point the Sun will reach in the sky that day — this is the Midheaven. These two angles form the structure of the birth chart, and are a key consideration in deciphering the chart. This is why astrologers always want to know exactly what time you were born, because that rising degree changes about every four minutes! (Remember, the Earth is revolving through the full 360 degrees of the Zodiac in 24 hours.)

So an astrological birth chart takes the circle of the Zodiac, puts it into two dimensions, and spins it so the rising degree at the location and time of birth is placed on the left side of the chart. Then the planets are situated in their appropriate locations in the chart relative to that rising degree. An astrological chart is an astronomically accurate map of the sky at any given place and time.

But what about those stars, the constellations? Do they have any relevance to a chart? Yes — some astrologers pay particular attention to the stars, in fact — and we even know where they are located! (Ooops, I did say I’d tone down the sarcasm, didn’t I?). But the planets of our solar system and the patterns they make in the sky relative to the Earth and the ecliptic are always the primary consideration in an astrology chart.

“But it’s unscientific!”
I know that some people who are reading this will be thinking something along the lines of “OK, you have an accurate map of the sky, but the conclusions you are drawing are completely unwarranted. There is no way that the planets could influence our thoughts/feelings/behavior/the events of our lives. Astrology is unscientific!” To which I always reply that I am not suggesting the planets are a direct influence, only that there is a correlation, and that correlation can be extremely helpful to us in deciphering and planning our lives. But *why* the positions of the planets correlate with our lives is not even a question we need to answer to be able to accept astrology. I’ve had a quote in my files for years attributed to Carl Sagan, though I’ve been unable to source it. Sagan was deeply skeptical of astrology, but a scientist first and last, and this quote epitomizes the kind of rigorous, honest scientific thought that I wish was more prevalent in discussions of astrology.

“That we can think of no mechanism for astrology is relevant, but unconvincing. No mechanism was known, for example, for continental drift when it was proposed by Wegener. Nevertheless, we see that Wegener was right, and those who objected on the grounds of unavailable mechanism were wrong.”

So those of us who have studied this ancient discipline — which is becoming even more accurate and useful in the modern computer era — continue to cast charts to help us find guidance and insight into our lives that comes from a broader perspective. Despite the often extreme skepticism, the discipline of astrology is active and growing because it works.