There Is A Tide: Summer Solstice and New Moon 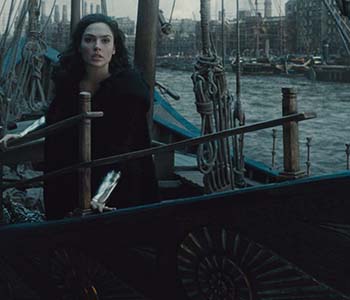 There is a tide in the affairs of men.
Which, taken at the flood, leads on to fortune;
Omitted, all the voyage of their life
Is bound in shallows and in miseries.
On such a full sea are we now afloat,
And we must take the current when it serves,
Or lose our ventures.
William Shakespeare ~ Julius Caesar Act 4, scene 3

I’ll look at what’s ahead in a bit, but first, for those of you who practice magic, or work to shape reality through meditation, mental discipline, and energy work (even if you don’t call it magic), this is a good week to “fire up the cauldron” (as a teacher of mine used to say). Change is in the air this week, and it’s always a good idea to work with Nature’s changes, to make sure you catch the tide.

We are on “a full sea” right now, in a time of intense change and growth. A shining path to progress (both spiritual and technological) is more available to us than ever, but so is a descent into the chaotic depths of human fear, hatred, and destruction. We need all hands on deck to steer this ship, and your magical work can help keep us on course. We aren’t drifting lazily in a rowboat right now, we’re sailing treacherous waters. Pay attention, and don’t shirk your magical practice.

If you are in the Asheville, NC area, you can join me on Saturday the 24th for an afternoon of magic and ritual at the beautiful Crystal Visions. There’s more information about that here, or just hit reply to this email and I’ll send the info to you.

Let’s look first at the Summer Solstice chart, which features Neptune, ruler of the oceans, ruling the chart and strongly placed at the Ascendent. Neptune is a planet of spirituality, empathy, inspiration, mysticism, and creativity, but it also can indicate deception, delusion, fantasy, escapism, scandal, and confusion.

Given the chart as a whole, I would venture to predict that we may well see a rash of high-profile scandals, and a backlash against fake news. And by that I mean “real” fake news, as in clickbait, hoaxes, and disinformation from Russian hackers. The best efforts of professional journalists and the mainstream media are not “fake news”. The mainstream media may not always be correct, or unbiased, but they mostly try to adhere to basic journalistic standards, despite any tweets you may read to the contrary. Capiche? Covfefe.

This necessarily convoluted explanation is pure Neptunian confusion, reflected in our political culture. But don’t think all this scandal and confusion is going to be happening “out there” and you can ignore it in your personal life. On the contrary, we all have to deal with Neptune in our charts, and when it is strongly placed like this, we are likely to have the issues it embodies pop up regularly in our personal lives. So here is my best advice on how to handle Neptune.

If you are under the influence of a Neptune transit, you can’t do the “I am a rock, I am an island” routine. Neptune will remind you again and again of how we are all connected. Even if you are a materialist and atheist, consider Neil DeGrasse Tyson’s reminder: “We are all connected; To each other, biologically. To the earth, chemically. To the rest of the universe atomically.” Whatever you do, say, or even think influences others, and they influence you. Is your influence in line with your personal spiritual ideals? And if not, why not?

There’s another side of Neptune that can be either fun or damaging. Neptune rules glamour, film and photography, fantasy and make believe. So have fun with dress up, cosplay, science fiction, the Wonder Woman movie and the latest episode of Pirates of the Caribbean, but remember that under a Neptune transit, it’s not only on the big screen where things are not as they seem. Be careful in your dealings with others — deliberate deceptions, misunderstandings, and confusion are in the air. Don’t get caught up in them. Be honest, and be discerning.

Women’s rights and financial acumen will be very much in the news over the next three months, as will issues of social justice for the disadvantaged. All of these issues will be brought in front of the courts — and the court of public opinion may be the most powerful. And speaking of courts, it looks like all the lawyering-up that’s happening in the White House will not be in vain — the President and his administration will be under considerable legal pressure, and applying it, as well. There is a strong tendency towards violence as a solution in this chart, and the glamorizing of war and violence will be a big part of the overall picture.

(A bit of technical detail for those who speak Astrology: In the Solstice chart, note Neptune rising, with Pisces’ other ruler, Jupiter, in a Yod [a.k.a. “Finger of God”] formation with Neptune and the Venus-Moon conjunction in Taurus — a strong placement for both those planets. Jupiter in Libra, co-ruling the chart, ruling the MC and in the 7th house, not only has the Finger of God pointing right at it, but also is the focal point of a T-square with Mars-Pluto opposition. Sun is at the AP in Cancer, and Mars is in Cancer — keep in mind Cancer’s tendency to jingoism and Pluto in Capricorn’s tendency to cruel practicality when you’re looking at that T-square.)

The chart of the Cancer New Moon suggests that we’ll be sailing on a high tide of emotions this month. Neptune, Venus, and Moon are all strong in their own signs, and emphasize the importance of relationships, family, and spiritual values. We may see some sudden changes in the areas of finance, taxes, and corporate responsibilities (now there’s a thought!), as well as children and their schooling.

Think about who you can nurture this month, and also think about how you let yourself be nurtured. We all need to care and be cared for, and that’s the best way to work with the energy of this month.

*Yes, the astrological Zodiac accurately tracks astronomical events. Please see my article on the Astronomy of Astrology for an explanation.