The Bull at the Carnival: Uranus in Taurus 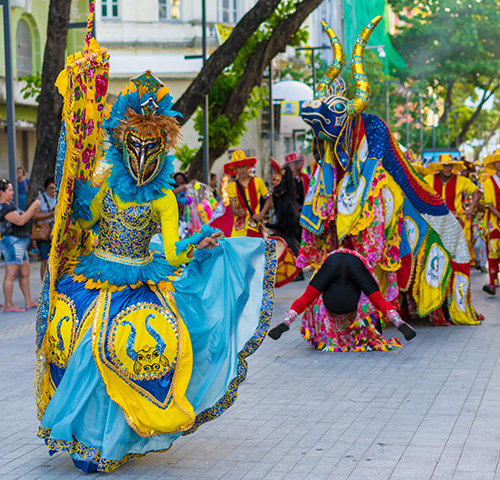 Are you ready for some change? Yeah, me too. Which is good, because when Uranus moves from one sign to the next, changes are imminent, both on a personal and global level. With Uranus involved, we can expect events that are sudden, surprising, and often extreme. If we understand the underlying energies that are in play, we can, to some degree, consciously direct them to the better outcomes.

Uranus changes signs every seven years, and tends to turn things relating to the new sign upside down, shake out their pockets, then set them down and spin them around. Let me give you some examples from previous times, because we almost invariably see some event of global significance within a couple of weeks on either side of the sign change.

A Bit of History

November 17, 1981 — Uranus (ruling space ships) enters Sagittarius, the sign of the Archer shooting the arrow that flies into the future. On November 12, the space shuttle Columbia was launched for the second time, with a brand-new robotic arm device.

Sagittarius also rules foreign countries, and on November 23, seeds of the Iran-Contra scandal were planted, as President Reagan signed the top-secret National Security Decision Directive, that authorized the CIA to recruit and support Contra rebels in Nicaragua.

December 3, 1988 — Uranus enters Capricorn. Uranus is explosive, and rules airplanes. Capricorn rules the Earth, and gravity. On December 2, the space shuttle Atlantis launched a (at the time) top-secret satellite for the CIA, and was almost lost due to rocket booster failures.

On December 21, PanAm flight 103 was blown up over Lockerbie, Scotland, killing all aboard, and many on the ground.

Uranus also rules the internet, and at some point near the end of the year, the first internet connection between the USA and Europe was made.

Oh, and Capricorn also rules walls. It was one year later, in 1989, with Saturn, Uranus and Neptune all together in Capricorn, Jupiter opposing them, that the Berlin Wall came down.

Fascinatingly, in late 1961, as the 6-month long Berlin crisis was coming to a head at Checkpoint Charlie on the newly-built Berlin Wall, Soviet and American tanks faced each other across that dividing line. Uranus was at the very end of ego-oriented Leo. As it moved into Virgo, the sign of service, discrimination (as in, dividing one thing from another), and military matters, the (very, very scary) crisis built to a head and was finally resolved as Kennedy told Khrushchev American tanks would back away as soon as the Russian ones did. Disaster was averted, and the Cold War remained cold. (Leo is considered a hot sign, Virgo a cold one)

January 13, 1996 — Uranus rules Aquarius, and so the planet and sign that rule technology and the internet came together, and over the next 7 years, modern internet and cell phone technology became available to a broader slice of society (Aquarius). In January, the first clamshell flip mobile phone debuted, and the first version of Java programming language was released.

March 10, 2003 — Uranus enters Pisces, and the Iraq War began on March 20th. Pisces is not a sign of war, but it is a sign of disarmament, and it was the “Iraq disarmament crisis” that lead to the actual war, which began on March 19. Just days before, the documents that were used to justify this war were exposed as fake. Pisces rules deception and forgeries.

Pisces also rules scandals, Uranus rules sudden change, and it was exactly on March 10 that the Dixie Chicks became embroiled in a huge scandal that upended their careers when Natalie Maines said they were ashamed that President Bush was from Texas.

March 12, 2011 — On the day before Uranus entered Aries there was a tremendous earthquake, and the resultant tsunami destroyed large swaths of Japan, including the Fukushima-Daichi power plant. (Uranus rules electricity, explosions (with Mars, Aries’ ruler), and earthquakes). The unprecedented and ongoing releases of radiation are still affecting the surrounding land and the Pacific Ocean, and the cleanup and decommissioning of the plant will take decades.

On a brighter note, on March 17, with Mercury also in Aries, the sign of the pioneer, NASA’s Messenger space probe became the first space craft ever to enter in orbit around Mercury.

And I bet you’re wondering what happened the last time it was in Taurus. That began in June of 1934, and Walt Disney’s Donald Duck made his debut 3 days later. How’s that for a world-changing event? But I’ll look at this last pass of Uranus through Taurus as we investigate the upcoming one, because there are, as you might imagine, parallels.

Taurus, the second sign of the Zodiac, the sign of the Bull, takes the new beginning of Aries and establishes it on the Earth with the resources needed for growth. Taurus takes pleasure in life, embodiment, the Earth. It learns to value some things and experiences above others. It accumulates possessions — this is the sign that rules money. It also rules Earth itself, the planet and the web of life.

Uranus is like the carnival, the amusement park, where there are surprises around every corner, rides that turn you upside down, strange things you’ve never seen before, bright lights, loud sounds, strong smells, different foods — constant stimulation of all your senses.

Now, imagine walking a bull through the middle of a carnival, and you’ll have a good idea of what Uranus in Taurus will be like.

Back in 1934, Roosevelt had just taken office, and The New Deal was in the works. Hitler and the Nazis solidified their power in June during “The Night of the Long Knives”, assassinating 100 party members to consolidate the party under Hitler, who went on to declare himself Führer in August. And so, as WW2 approached, geography and borders began to be questioned and redefined.

We are not now, of course, in the middle of a depression. We are in the middle of an economy of unrestrained growth, one that puts short-term gain over long-term survival of our entire species, as we poison and mine the planet of resources with no thought for the future or the cycles of Nature that support all life on Earth. We live in denial, but on some level we know the truth, and so we live in fear as well.

This bubble of denial will burst, I believe, at some point over the next 7 years. Borders will be questioned and geography will change in dramatic and surprising ways. Flexibility will be important in this time, as will a willingness to serve the land and do your part to heal the web of life.

Money is another point of focus, and we are looking at major changes in banking and currency, particularly crypto-currencies (Uranus rules technology). It was back in 1934 that the Glass-Steagall Act was passed. It was weakened through the 70s, 80s, and 90s, and finally repealed in 1999, while Uranus was in the rule-breaking sign of its domicile — Aquarius. That repeal has been cited by many economists as a contributing factor in the financial crisis of 2007-2008. We will likely be coming face-to-face with the need for rules once again.

Financial astrologer Raymond Merriman says that industries related to the sign Uranus is passing through tend to go through a boom-and-bust period. If you are an investor, you may want to follow him to learn more about the upcoming financial opportunities and dangers.

Let’s also not forget that Uranus, as the modern ruler of Aquarius, is very much concerned with social justice, and in Taurus that concern will manifest over an equable distribution of resources. Uranus is also the planet of revolution, and, to quote Chris Rock, “If poor people knew how rich rich people are, there would be riots in the streets.” I would not be in the least surprised if we find out just how rich those rich folk are during Uranus’s transit through Taurus. Uranus loves a good riot.

The other major area of focus over the next 7 years will be agriculture. There certainly will be changes in this area, but hopefully, it will not involve another Dust Bowl, as in the 30s, but environmental disruptions to the food supply may be profound and long-lasting. How’s your food security?

We will see widespread new developments in sustainable agriculture, and factory farming becoming a thing of the past. (Hey, I can dream!). I expect that the home gardening movement, GMOs in agriculture, pollinator crises, and anything to do with the growing of food will be front and center in our collective attention. Did I mention food security? Yeah. You should look into that. Which brings me to the big question:

So…How Will This Affect Me?

I also expect that most of you are wondering how this long-term transit will manifest in your life. As always, I want to emphasize that individuals have much more leeway and ability to shape and direct their lives, so collective problems and disasters do not necessarily mean personal ones.

OTOH, big shit happens sometimes, and you may find yourself in the middle of situations that require considerable flexibility. A lack of mental flexibility can make problematic situations worse — practice looking for options, seeing other points of view, finding multiple solutions for problems, and you’ll find yourself better able to respond appropriately to changing situations.

Which areas of your life will be affected depends on where the planets and signs fall in your natal chart. You might want to learn just enough astrology to decipher your own chart and how current transits are affecting it. My little pdf booklet “How To Read Your Own Astrology Chart” (such a straightforward Taurean title!), will get you started, and it comes with a computerized report on your personal natal chart. You can get it here.

If you have your chart and know a little astrology, look at the houses covered by Taurus in your chart — that’s where the big changes will be happening. You’ll also want to look at Venus (Taurus’ ruler) and Uranus in your natal chart, and consider the current transits to both planets, as well as any planets Uranus will aspect as it moves through Taurus. Another option, of course, is to set up an appointment with me, and we’ll take a look at what’s coming up for you, and how to get you where you want to go.

There’s a lot I haven’t covered here, but I will be exploring Uranus in Taurus in other posts as we move through it. I’ll have more to say in my post for the next New Moon. Meantime, for those of you who celebrate, bright blessings of Beltane to you!