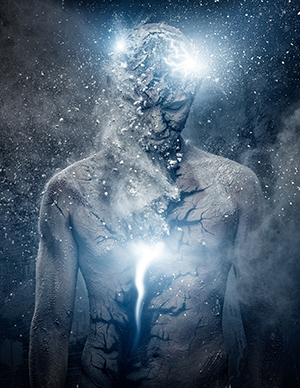 Have you found yourself getting a little impatient with your fellow citizens of Earth lately? Been ruminating about how we humans are driving ourselves to likely extinction, between environmental issues and our storied inability to get along with one another? Or maybe you’ve been considering the global nuclear arsenal (which includes power plants) and the emotional instability of various people who have access to the death-dealing “buttons".

Yeah, I’m worried too. And judging by my news feeds, we are far from alone.

But this lunar eclipse in Aquarius gives us a chance to make some decisions about how we will face these dangers and what we will do to mitigate them. It offers visionary insights, and a different way of doing things. It presents us with solutions that involve everyone, and demand group effort. It invites us to dance on the cutting edge of change and evolution. Do you have your dancing shoes on?

The chart of an eclipse begins to noticeably take effect a week or two in advance of the actual event, and remains in effect for several months to a year afterwards (think of a tide coming in and going out). This eclipse, which happens on August 7th at 15 degrees and 25 minutes of Leo, gains power by falling on the midpoint between the Summer Solstice and Autumn Equinoxes, which is more roughly marked by the traditional dates of the Celtic/Pagan holiday of Lammas, a.k.a Lughnasadh, or the First Harvest. (I just celebrate all week, to cover the traditional and astronomical dates!)

(Here’s a bit of what I’m looking at astrologically, for those of you who speak the language. Cast the chart for August 7, 2:12 PM EDT, Washington, DC. Ascendant 19° 56’ Scorpio.
Like all of the four mid-points, or “cross-quarter” days (the “quarters” are formed by the two equinoxes and two solstices), the Sun is in the middle of a fixed sign, and represents the full embodiment of the Element ruling that sign. In this case, the Element is Fire. Since this is a Full Moon, the Moon is in the opposite sign of Aquarius, an Air sign. Sun is strong in its own sign, and still within orb of its recent conjunction with Mars, co-ruler of the Ascendant. Jupiter in Libra is trine/sextile the New Moon opposition, and tightly square Pluto in Capricorn. Mercury is powerfully positioned as well, in its own sign of Virgo, in the 10th conjunct and ruling the MC of this chart (casting for DC makes it predictive for the USA). Mercury is trine Pluto [which co-rules the AS], and opposed Neptune, which is also in the sign it co-rules with Jupiter. Neptune is also in and ruling the fourth house of the land and environment. Uranus, the co-ruler of Aquarius, is rolling around on deck like a loose cannon, making no major aspects, only a tight semi-square to Neptune. )

Now, back to the part about dancing on the edge — which we certainly are. As always, how strongly you will respond to this eclipse depends on your natal chart, but the theme of deep change will be felt by everyone, just in varying degrees. The two weeks between this lunar eclipse and the solar eclipse coming on the 21st — in other words, this month’s waning Moon — will be a particularly good time to work on assessing and releasing fears, and envisioning the world you want. (It’s not a great time for starting new ventures. If you must, then consult a competent electional astrologer (like me!) to get the best possible time, as well as some advice for ameliorating the problematic influences.)

It’s important that Witches, magicians, shamanic practitioners and other spiritual people who work to create change through consciousness remember that it’s not only when we are sitting at our altars that we are influencing reality. Everyone’s mind and emotions are always influencing the world around them, but when you’ve worked to train your mind and fully access your emotions, then your influence is stronger 24/7. As your mind becomes stronger, so does your influence on reality, no matter where you are or what you are doing, so it is crucial that you pay attention to your everyday thoughts and emotional states.

Personally, I think magical training brings a responsibility with it — the responsibility to hold a vision, not just for yourself, but for the world around you. Aquarius is a visionary sign, and Leo treasures the individual’s creativity. What is the most positive and creative future you can envision for our world? What intentions can you hold that will help create a psychic climate for breakthroughs in science, in human understanding, in global spiritual awareness? How can you contribute, even in a small way, to shifting the zeitgeist of our time in the direction of compassion, caring and connection to the Earth?

Of course, there will be forces that are working in opposition to your vision, and those forces — like fear, greed, and sheer stupidity — leave their mark everywhere. Fear can creep into our minds and hearts, and the news can be downright depressing, fogging our mental windows with some very negative thoughtforms. Aquarius’ lessons of detachment apply here. Clean the windows so you can keep your vision clearly in mind. The next two weeks are a fine time to wield the magical Windex™, seeking out and changing fearful and negative patterns of thought, and clearing our energy bodies of psychic spiderwebs and dirt. (Salt and herb baths can be very helpful for clearing energy)

If you find yourself emotionally overwrought, spend some time sorting out what you’re feeling. Look for beliefs you may be holding in your sub-conscious that are in conflict with beliefs you hold consciously. For example, a conscious belief that you are a smart and successful person who does their job well may be undermined when you are working on budget spreadsheets by a belief ingrained in childhood that you are not good at math. Beliefs like that need to be brought to the surface, and either seen for the mis-perceptions that they are, or accepted as truth and worked around. The smart and successful person might outsource the dreaded budget work! (Journaling is a good tool for this work)

What does an evolved world look like to you? As we approach the powerful solar eclipse of August 21st, hold that vision clearly in your mind and heart. You are like a string on a guitar — pluck one, and the others begin to vibrate in resonance. Evoke your vision, birth it into the world by keeping your own everyday thoughts and feelings in resonance with it.

Nationally, major flooding in several areas is a real possibility, so be aware and careful if you are in a flood-prone area.

The Executive Branch will continue to be undermined by deception and illusion, despite very public efforts to impose discipline and stability in the White House. The Judicial Branch will be prominent and in the news for a variety of possible reasons. The Legislative Branch is looking heavily influenced by women — I expect the female GOP senators who blocked the destruction of the Affordable Care Act — Senators Murkowski and Collins — will continue to be a thorn in the side of the GOP establishment.

Major financial power plays are likely, though we may not see them for what they are at first. We may witness a lot of drama around the debt ceiling.

Military action of some kind is likely, and there is a disturbing possibility that it may be internal.

On the positive side, Jupiter is in there pitching for justice and diplomacy, and an Aquarius Moon invariably brings issues of social justice to the forefront. There’s a real wild card in the form of Uranus which can bring major breakthroughs. Let’s go for breakthroughs in compassion and awareness, shall we?

Blessings of the harvest to you!