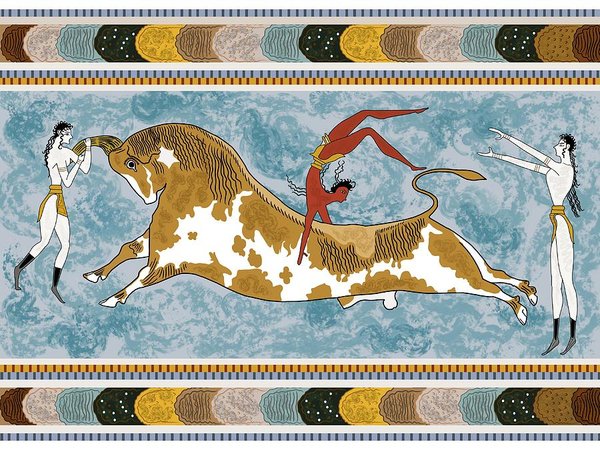 I love the weeks when the Sun is in Taurus. Here on the mountain where I live, everything is growing apace, the trees leafing out in multiple shades of green. I write this on my front porch, as the Sun rises through the trees to my left.

Small cherries are forming on the tree in my front yard. The apple trees in my neighbor’s orchard still sport a few flowers, and their new, light green leaves gracefully cover what were dark, gnarled branches just a few weeks ago.

The musical sound of the little waterfall and the stream that runs through my property blends with the soughing wind in the trees. My morning coffee is extra-delicious when I drink it with the soft spring air.

I love the Autumn as well — the earthy scent of fallen leaves, their brilliant coloring, the cooling breezes — so I’m certain I would feel much the same were I in the Southern Hemisphere during these weeks of Taurus. The changes in the tropics are more subtle, but still there. The change of season invites our increased awareness.

No matter where you live, a New Moon in Taurus always gives us an opportunity to reconnect with our senses, to occupy our bodies, to remind ourselves of the joy and beauty that are an intrinsic part of life on this amazing planet.

Do you remember the children’s story about Ferdinand the Bull, who would rather smell the flowers than fight? Taurus’ animal is the bull, and mostly, Taurus is pretty easygoing — kind of like Ferdinand. But when Taureans are pushed far enough, they don’t get mad, they get enraged. Unfortunately, there are a few cattle prods in the chart of this New Moon, so we’ll need to work on keeping the peace.

Here’s a briefing for astrologers, then we’ll move on to interpretation.

Cast the chart for May 4, 6:45 pm, Washington, DC. 29°31’ Libra AS. I’m using equal houses. Remember the angles and houses are for the USA only, and the chart is for the month ahead.

The New Moon is less than a degree from one of what Dane Rudhyar called “the gates of the avatar” — 15 degrees of the fixed signs. They mark gateways between realities of flesh and spirit. They are also the apotheosis, the pure expression of their respective elements — in this case, the element of Earth.

Note the anaretic degree of Libra rising — this is a “last chance” degree and tends toward crises of one kind or another. Venus rules both the New Moon and the AS when the chart is cast for the USA.

Venus is not comfortable this month. She’s in detriment in Aries, which tends to try her temper, and in a close, approaching square to that extraordinarily intense grouping of Saturn, Pluto, and the South Node in Capricorn. She’s also right on the Sun/Neptune midpoint.

Despite being in detriment, she has power in this chart — note her rulership of the New Moon itself, of Uranus, of the AS, and of both the MC and 10th house through a chain of dispositorship.
That’s one cattle prod.

Uranus is in a wide but effective conjunction with the New Moon. It’s in the 7th conjunct the descendant, and is tightly square the MC. That’s another cattle prod.

Mars, ruler of Aries, and Mercury are in mutual reception. Mars also has power in this chart. It opposes Jupiter, is tightly inconjunct the previously-mentioned intense grouping in Capricorn, in the 8th house, and dispositing Venus. It’s also out of bounds. Think in terms of the bull in the china shop. Cattle prod #3.

The astrology is telling us that Ferdinand isn’t going to get to relax and smell the flowers this month. There’s likely to be an enraged bull in the pasture, or the arena, or maybe the china shop. We’ll need to move with skill and attention to avoid a confrontation. Of course, we may have to engage for one reason or another, in which case we may want to consider the ancient art of bull-leaping.

Bull-leaping appears to have been a ritual and probably religious art form to the Minoan people, for whom the bull was a subject of veneration. It requires considerable acrobatic skill and intense focus to essentially work with a large, horned, pissed-off animal as a balance beam. (And if you’d like to explore what it might have been like, check out Mary Renault’s marvelous novel, The King Must Die.)

While our acrobatic maneuvers this month may not be physical, we will need mental and emotional flexibility, inner strength, and focused attention to dance and leap around obstacles, to engage with conflict, as opposed to simply running like hell from whatever’s chasing us. Especially if what’s chasing us are our own fears and insecurities.

This month, we’ll want to pay close attention to the world around us. Don’t just skate along with your normal routine — make a point of jumping out of whatever ruts you feel stuck in. Work to change things up in ways that allow you to appreciate the gift of life and the potentials of your creative energy. You may find you’re in a much better place after you get around the obstacles and deal appropriately with the conflicts.

Check in with what drives you. Is it expediency, or your core values and soul-level desires? If you bow to expediency, you’ll end up running like hell instead of engaging creatively with whatever is confronting you. Your soul will teach you how to leap and dance. Your core values will give you strength.

The Earth gives us strength as well. We are here on this planet for a reason. We are co-creators of this remarkable reality, and deepening our connection with the planet itself and its web of life helps us understand the process of creation and how we can affect it. Spend some time connecting with the Earth, and it will nourish you energetically and spiritually as well as physically.

A note to my readers who practice magic. Glamour is a double-edged sword this month. (OK, particularly this month.) If you use it as a weapon, be very aware of what you are doing. If you use it for purposes that do not align with your core values, I can pretty much guarantee it’s going to either blow up or come back and bite you in sensitive places. (I’m mostly referring to glamour magic here, but the same is true of the Hollywood sort of glamour, which usually tends to wear thin rather than explode — but this month, watch for explosions.)

Your best antidote to all the craziness is to channel Ferdinand. Spend some time in nature. Remember to smell the flowers. Take bubble baths. Set the table for your meals, and sit down to eat them. Say grace, or simply give thanks. Enjoy your food. Get enough sleep. Dream big. Occupy your body, and open yourself to wonder.

On The National Stage

Some of what I write here applies globally, but the chart is cast for the USA. Astrologers: I’m also looking at the New Moon chart in a bi-wheel with the USA chart. Note the transiting MA-JU opposition on US natal Mars-Neptune square, transiting Pluto oppose natal Mercury.

We are living in historic times, particularly for our country, and the astrology reflects it. I interpreted the current transits/progressions for the USA in this post, where I wrote:

“This period is like multiple Dark Moons all happening at once, because so many long-term planetary cycles are in their waning phase. We need to bury, phase out, dissolve, reject, discard, and otherwise remove aspects of our society that are not serving us well as a country — usually because they are serving one group at the expense of another.[snip]

“Whether what we build is for better or worse remains to be seen, and depends a great deal on how much courage, caring, creativity, innovation, and can-do attitude we the people can conjure up.”

Marie Kondo’s got nothing on Pluto and Saturn when it comes to clearing out our national closets.

I’m encouraged by the fight for truth suggested in this New Moon chart. It will, I hope, inspire actions to overcome racism and other forms of fear based on “othering” that are having such toxic effects on the country.

But I also recognize that the chart suggests internal conflicts as well as problematic and even warlike interactions with foreign countries. Some of those interactions will be sudden and surprising, and probably have to do with agriculture or money and banking. Internally, religion is likely to spark conflict.

We will also see highly weaponized news and information warfare. Everyone has their own agenda, and getting people even moving in the same direction, much less working together, may be difficult. Difficult, but necessary.

Keep in mind that this applies to the country, not just the government. In your job, for instance, you may feel like you are herding cats, and/or you can’t trust the information coming down from corporate, and/or your company is dealing with rumors and innuendo in the media. As individuals we have choices, but the overall energy patterns of the country still affect us all.

There’s a whole lot of karmic manure hitting the proverbial fan this month, and even if you aren’t in the middle of it, you may get splattered. Staying alert, focused, and flexible is key to avoiding any rampaging bulls in your world. And remember, sometimes you’re better off running up to and leaping over whatever is charging at you than running from it.

Blessings of Beltane to you!